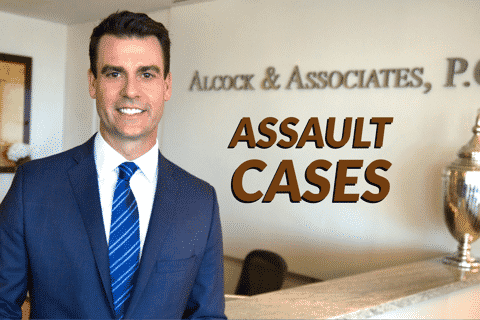 Our Attorneys Know How To Win Assault Cases

Check Out Our Wins Here

Our specialized team of assault attorneys have had the honor and responsibility of handling many assault cases throughout the state of Arizona. If you or a loved one have been arrested for an assault case, we would like to meet with you today to see how we can help you through the process. We understand that for many, if not all, the criminal process can be confusing and intimidating. Having said this, we strongly encourage and advise you to contact our assault lawyers BEFORE your first court date. This will give us the best opportunity to have the necessary time in order to look at the facts of your case, prepare a defense and finally to ensure that we do everything in our power to win your assault case.

The state of Arizona has various types of charges when it comes to a crime such as assault. Likewise, there are also a variety of factors come into play when determining how an assault case should be classified or categorized. Some cases may be considered as simple as a misdemeanor. Other cases that seem similar in retrospect may be considered and charged as a serious felony cases.

Our assault attorneys advise you to consider some basic questions that we ask in order to to determine the classification and seriousness of your assault case.

Here are some of the factors that are likely going to make an assault case more serious.

One of the most common questions that individuals ask in regards to their assault case is if their charge is a misdemeanor or a felony. Chances are if you have to go to a city court, then you are probably being charged with a misdemeanor.

However, if the victim of the alleged assault was a public official or police officer, some sort of weapon was used, or there was serious bodily injury, assault can be charged as a felony. Having said this, if you have to go to superior court, you are likely being charged with a felony.

There are cases in which an assault charge can also be a domestic violence charge. This occurs when the alleged victim of the assault lives at the same address as the individual who has been accused. Domestic violence is a separate designation, and can lead to serious consequences for anyone who is found guilty.

There are a couple of defenses that can be used in an assault case. One defense would be that the assault was in self defense and defense of others.

Another defense to assault is that the crime did not take place at all. There are oftentimes where assault cases are successfully defended due to the fact that eyewitness testimonies are confusing and contradictory.

Let Our Attoneys Help you Today

Our Attorneys Know How To Win Assault Cases:

Here’s an example of a successful result for an assault case. Our firm won a very serious felony assault case. Our client took his case to a trial by jury. Our client, though he was arrested, was threatened by two men in a parking lot. The two men later told the police that our client was pointing a gun at them. In the state of Arizona, if you even point a gun at someone it can lead to charges of Aggravated Assault, which is a Class 3 Dangerous Offense. This crime carries with it significant mandatory prison time.

Our firm presented evidence to the jury that raised substantial doubts about the victim’s stories. We demonstrated that it was quite possible that the alleged assault never took place and that the so called victims had invented their story. As a result, the jury returned a verdict of “Not Guilty.”

If you need to contact a criminal defense lawyer about an assault case, give us a call. The consultation is free.

The Assault Statute in Arizona:

Tips On How To Survive An Assault Charge

Do not have contact with the alleged victim. The state can charge you with additional charges and a judge can also take into consideration any attempts by you to influence a victim or witness.

Be patient during the court process. Don’t panic and allow the process to unfold. The court system can cause people to make bad decisions because it is very stressful. Learn as much as you can about how the system works and what to expect. Don’t let fear guide you during this time.