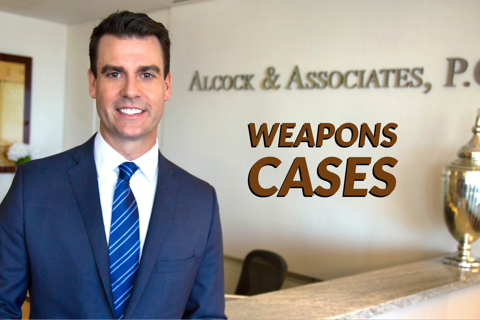 Arizona protects the rights of its citizens to bear arms. However, those rights can be limited after conviction for a felony and some misdemeanors. Individuals who are undocumented aliens or nonimmigrant aliens traveling with or without documentation cannot possess deadly or prohibited weapons in Arizona either. Both of these groups of people are prohibited possessors. Possession of a deadly weapon by a prohibited possessor is banned by A.R.S. 13-3102.  An aggressive and experienced attorney can work to reduce a plea or work in order to get the case dismissed entirely. Every case and its facts are different. It is important to meet in person so we can discuss your particular history, and then give clear answers to your questions.

In the state of Arizona, the law liberally permits individuals to carry firearms. However, this right can be taken away. Felony convictions and some types of misdemeanors can prevent someone from doing so.

Misconduct involving weapons is a Class 4 Felony in Arizona.

This felony is considered to be very serious and can prove to be even more problematic if the individual charged has prior convictions. Most people who are charged with misconduct involving weapons in Arizona happen to have prior convictions.

Because of the nature of the crime, the prosecution may make plea offers for misconduct involving weapons that are very harsh and involve substantial prison time. Keep in mind that the first plea offer that they make can change. If you hire our team here at Alcock and Associates, our ultimate goal is to win your case.

An aggressive and experienced attorney can work to reduce a plea or work in order to get the case dismissed entirely. Clearly, every case and its facts are different. That’s why it would be the most beneficial to meet in person so we can discuss your particular history, and then give clear answers to your questions.

Our staff includes former prosecutors and also a former police officer. Throughout the years we have handled hundreds of cases involving misconduct involving weapons. We understand how the law works and the intricate defenses and affirmative defenses that are needed to successfully represent a client charged with this type of crime.

Our firm is dedicated to helping people understand the charges that they face. We believe that our clients should understand how the law works and how to defend you. Call today – 602-989-5000

Most Misconduct Involving Weapons cases involve someone with a felony record. The attorneys at Alcock & Associates can file motions to prevent the jury from hearing that you are a felon when they are deciding whether you possessed a weapon. This stops the jury from pre-judging you based on your history rather than deciding the case on the facts from that incident.

The attorneys at Alcock & Associates get up and tell the jury the correct narrative about the charges in your case at trial. Each attorney has their own strategy for these cases, but The Alcock attorneys will teach the jury and inform them of the proper way to vote when it comes to a verdict.

A police officer who often barely graduated high school is going to make assumptions and mistaken connections in weapons cases. The attorneys at Alcock & Associates can direct the story, or narrative, in the proper way so that the jury understands.

Misconduct Involving Weapons is most commonly committed by: Possessing a deadly weapon or prohibited weapon if such person is a prohibited possessor.

-This is a class four felony carrying between 1.5 and 3 years in prison with a presumptive sentence of 2.5 years.

A deadly weapon is anything designed for lethal use including firearms.

Prohibited possessors (individuals not allowed to possess a deadly weapon) include:

Misconduct Involving Weapons is committed in several other ways:

The three big issues in most Misconduct Involving Weapons case are:

Here are some frequently asked questions about weapons cases in Arizona: