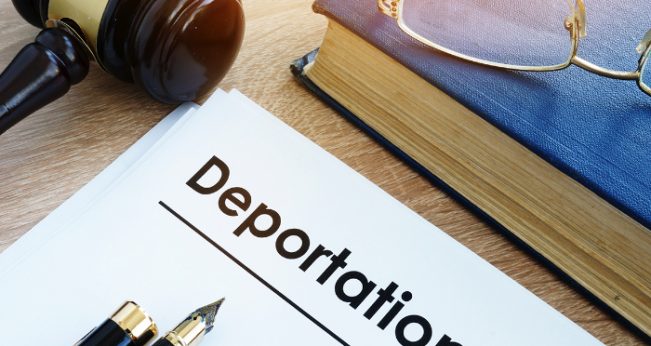 Our top immigration attorneys have represented thousands of people in deportation cases. We’re a group of immigration lawyers who are passionate about defending our clients. We understand the stress and panic felt by family and friends when a loved one is placed immigration custody. We know how to handle your case and we are here to help.

When a person is detained by ICE, they are often taken to a processing center and then are transported to a detention center. In Arizona detained persons are typically sent to the Florence, Eloy, or La Palma Detention Centers.

Some people may qualify for a bond. This means that an Immigration Judge may allow the detained person to pay a certain amount of money in order to leave the detention facility. We have helped thousands of people obtain immigration bonds, and we can help you every step of the way, from obtaining a bond all the way through to the final hearing.

Unfortunately, it can take several days or even weeks before a Judge will hold an immigration bond hearing. Much of this will depend on the detention center processing time and the Immigration Court’s schedule. If a bond is granted, the detained person is allowed to return home and can fight his or her case outside of the detention center. In all cases, it makes sense to speak with a deportation attorney as soon as possible. You may only have one chance to get a bond and a mistake could result in deportation!

Please feel free to call our deportation lawyers in phoenix at any time. Our team will take the time to understand your case and we know how to help. Every case is unique and the consultation is free. We will look for positive solutions and do everything possible to keep families together. We believe in our clients and take our representation extremely seriously. We look forward to speaking with you today.

If you want to know more about the process, read below for more info.

OUR IMMIGRATION ATTORNEYS CAN HELP YOU GET A BOND

If the Judge feels that the person might be a danger or a flight risk, the Judge will deny bond. The Judge is free to consider any evidence available to them to determine flight risk or danger. This means that the Judge will look at all past arrests, police reports, and prior immigration history.

For example, a person who has been convicted of a DUI offense may be considered a danger to the community and an immigration judge can deny a bond for that reason alone. The Judge will also consider whether or not the person was caught crossing the border or has established residence in the United States. Someone who does not have an immediate relative who is US Citizen or Legal Permanent Resident may be considered an extreme flight risk because they do not qualify for 42(b) cancellation of removal.

To get a bond, a detained person will need to provide the Judge with documents. An immigration attorney will help you figure out what documents the Judge will want to see in your case.

It is important to note that there are many different Immigration Judges, and some Judges are more likely to give bonds than other Judges. There is no way to know with certainty how a Judge will rule in a bond case. Each case is different and it is important to discuss your particular case with one of our immigration attorneys.

As noted above, there are a number of crimes that make it impossible to obtain a bond and/or 42(b) cancellation. These offenses are called Aggravated Felonies. If the person seeking bond has one of the following convictions, they will not be eligible to receive a bond.

These Crimes Make Getting a Bond Impossible:

The defense of Cancellation of Removal requires 10 years in the country, good moral character, immediate relatives who are residents or citizens, and for these relatives to suffer extreme hardship. Extreme hardship is a variable that is analyzed only at the time of the hearing, this means that applicants may qualify for a Cancellation of Removal even if family members are healthy.

The asylum defense requires persecution by your country’s government, or persecution by people that the government cannot control. Persecution must exist due to race, nationality, religion, political opinion, or membership in a social group.

Formulating these defenses takes a period of one to three years.

As lawyers our objective is always to solve the problem, in cases where the defenses are not favorable, there is the possibility of an appeal. The appeal is a process in which the same case is presented to a judicial agency of greater authority. This is a lengthy process, which allows your case to be examined by another more experienced judge. Appeals are filed with the Board of Immigration Appeals. People under an appeal process cannot be deported, which is why their stay in the country is extended until the Board of Immigration Appeals judges their case.

Whichever is your case, people under deportation proceedings should not go to court alone, these defenses determine their future in the country, and deserve an aggressive attorney by their side, with the proper ability, skill and professionalism to represent their interests.

WE HANDLE THE DEPORTATION CASE FROM START TO FINISH

Call us now for a free consultation. Our experienced team of deportation lawyers are ready to answer your questions. We have appeared in all immigration courts in Arizona and we know how to win. Let us help you today.

WHAT HAPPENS AFTER THE BOND IS GRANTED?

If a bond is granted, the next step is fighting the actual immigration case. If your immigration case is based on the time that you’ve lived in the United States and your United States Citizen or Permanent Resident family members, this would be the out of custody 42(b) Cancellation of Removal process. This is distinct process and the requirements can be confusing. Below are some of the questions that we must ask to determine whether or not a person is eligible to fight this type of case. In short, it is very difficult to list all the ways you can win a removal hearing, but the questions below give the framework that the judge will consider.

Please keep in mind that if you receive a bond, but do not qualify for 42(b) cancellation, you may not be eligible to obtain a work permit. There are other types of case that you might qualify for, so again it is important to speak with one of our immigration attorneys as soon as possible. We hope that this helps you better understand the process and look forward to helping you and your loved ones in the future.

Choosing Alcock & associates was a blessing to us from day one. They made my wife’s immigration case a breeze. Daniella Hernandez helped us and she was wonderful. If she wasn’t available to speak at the moment, we would always get a quick call soon after. She answered every question we had with confidence and it was clear that she knew what she was doing.

Mr. Alcock since the early 2000 and I’ve seen all his work and growth on helping the community and now after 10 years of residency, I had no doubt of coming to the firm for advice regarding my citizenship process.

Hands down, the best law firm. They really worked hard and still working hard on my complicated immigration case. So far it’s really a good experience with the attorney Lisa, co-attorney Emanuel and all the front staff.

This is the only law firm I turn to for legal consult/representation. Immigration attorney, Lisa Elkin, assisted my wife with her legal residence status. After 34 years of living in this country my wife is finally a legal resident of the United States.

Alcock & Associates has helped me greatly when acquiring and renewing my DACA permit. They are extremely kind hearted and go above and beyond to help the people.

Really professional lawyers. Took two different cases based on immigration from us. One with Cody for the deportation withheld process thank you so much for everything for closing completely the deportation process against my husband.

Very good group of lawyers who work, for your interests without any rest. Thanks to that today I can say that I am a resident I do not have how to thank everything they did for me. Thank you very much and may the Lord bless you.

This will be my third time coming with Alcock & Associates for my Daca and as always they never disappoint, everyone here is super helpful and welcoming! Thank you Kirk for helping with my renewal

Dora and Lisa (the lawyer) did such a wonderful and professional job with my husband's residency. Everything went smooth at ciudad juarez. Everything they said would happen, did. They prepare you very well. I recommend Alcock & Associates 100%. They are honest and will let you know the truth