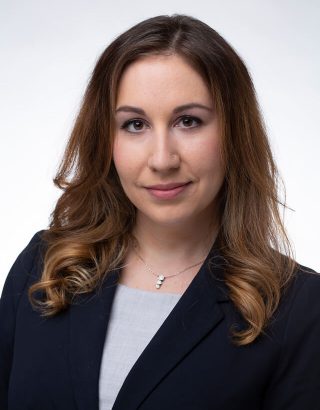 I am originally from New Jersey and have spent the majority of my life in Arizona. I attended Hamilton High School in Chandler, Arizona. I completed my undergraduate degrees in public administration and Russian language, literature, and culture at the State University of New York University at Albany in Albany, New York, where I was also a member of the school’s varsity rowing team. I obtained my law degree from Arizona Summit Law School (formerly Phoenix School of Law) and am admitted to practice in the state of Arizona.

I currently practice immigration law at Alcock & Associates and primarily handle provisional unlawful presence waivers, consular processing, adjustment of status, naturalization, self-petitions under the Violence Against Women Act, and U-Visas for victims of qualifying crimes. Immigration law is very important to me and my family.

All of my great grandparents were immigrants and came to the United States through Ellis Island in New York. My ancestors are from what are now parts of Czech Republic and Slovakia on my mother’s side, and from Russia and Poland on my father’s side. I love to help others see their family gain status in the United States, just as my great grandparents did about 100 years ago.