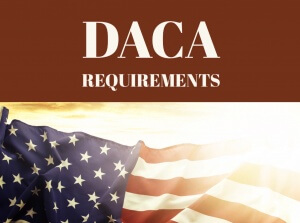 DACA is a program introduced under President Obama, has recently become a hot topic in the news.  Under President Trump’s new administration, he has promised to be tough on immigration but has also said he has a “soft spot” for DACA cardholders.  DACA was introduced to protect illegal immigrants who were brought to America as children.  Recently though, there have been headlines that some DACA cardholders are beginning to be deported.  It is important to understand what DACA is and the provisions it grants to cardholders. U.S Citizenship and Immigration Services explains what exactly DACA is, “On June 15, 2012, the Secretary of Homeland Security announced that certain people who came to the United States as children and meet several guidelines may request consideration of deferred action for a period of two years, subject to renewal. They are also eligible for work authorization. Deferred action is a use of prosecutorial discretion to defer removal action against an individual for a certain period of time. Deferred action does not provide lawful status… Anyone requesting DACA must have been under the age of 31 as of June 15, 2012. You must also be at least 15 years or older to request DACA, unless you are currently in removal proceedings or have a final removal or voluntary departure order.”

Securing DACA status, as well as maintaining it, can be a complicated legal minefield.  It is incredibly important that if you are going to file for DACA status for the first time, or need legal assistance regarding your DACA status that you hire an experienced immigration attorney.  A DACA application review can take anywhere from 4 – 6 months and involves many complicated forms.  Should you miss a form or fill one out incorrectly, it could delay your DACA review process or result in you being denied.  Make no mistake, as it stands right now during the Trump presidency, DACA still stands, but it is important that you do not make any missteps during the process.  It is certainly a tenuous time for immigration and with such uncertainty about what will happen in the coming months, it is in your best interest to consult an experienced and knowledgeable immigration attorney.  Not only will an immigration attorney be able to help you with filling out all of the forms, but they will be able to advocate for you should the need arise.