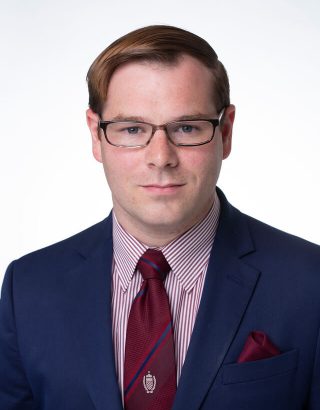 David Le Lievre practices criminal defense at Alcock & Associates, with an emphasis on major felony cases. David has represented clients in a wide range of criminal matters, including first degree murder, sexual assault, armed robbery, and fraud. David represents clients throughout the State of Arizona in nearly every county, and is familiar with the different practices in each courtroom. Besides his work on the state level, David also practices federal law in the Federal District of Arizona, both in Phoenix and Tucson. David’s federal cases have included possession of drugs for sale, sexual exploitation of a minor, and transporting illegal aliens for profit. David is passionate about protecting his client’s constitutional rights, and holding the Government accountable for their actions.

David attended law school at Phoenix School of Law. During his studies, David interned with the Maricopa County Attorney’s Office and the Arizona Attorney General’s Office. These internships assisted David in learning how the State prosecutes cases, including their strategies and main objectives in bringing charges against a defendant. David also did extensive pro bono work during his legal studies, assisting in an international lawsuit against the European Union on behalf of the Roma people of Kosovo for war crimes.

Born in Massachusetts, David is a true New Englander at heart, but has come to love Phoenix. David also enjoys spending time with his family and cheering on the New England Patriots.