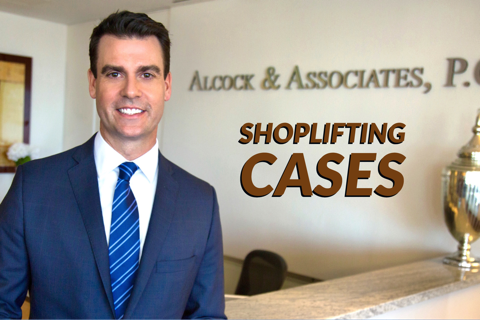 Here at Alcock and Associates we handle all types of shoplifting charges in the state of Arizona. Even though many individuals treat shoplifting as a petty offense, it can prove to be quite serious in some cases. There are many important variables when looking at a shoplifting case including:

If you answered yes to any of these questions above, there is a chance that you may be facing a felony charge and we recommend that you get into contact with a defense attorney. On the other hand, if this is your first offense and you do not fall into any of the categories or questions which were stated above, you may be eligible to be admitted into a diversion type of program. Shoplifting is the type of offense in Arizona–along with a various amount of non-violent misdemeanors–that can frequently be resolved with a diversion program. However, as previously stated, individuals who are charged with shoplifting who also have multiple prior offenses on their record can face felony charges and prison time.

If you would like a free consultation do not hesitate to contact us. For more information feel free to click on the video above to learn about shoplifting in Arizona.

If you have been charged with shoplifting, we strongly encourage you to contact an attorney immediately.

Shoplifting is a type of theft crime which involves taking merchandise from a retail store. This is known to be one of the most common charged offenses in the state of Arizona. Shoplifting can also be charged as either a misdemeanor or a felony, which depends on how the theft was committed and the value of the items taken.

Below we have provided the Arizona Statute for shoplifting:

A. A person commits shoplifting if, while in an establishment in which merchandise is displayed for sale, the person knowingly obtains such goods of another with the intent to deprive that person of such goods by:

1. Removing any of the goods from the immediate display or from any other place within the establishment without paying the purchase price; or

2. Charging the purchase price of the goods to a fictitious person or any person without that person’s authority; or

3. Paying less than the purchase price of the goods by some trick or artifice such as altering, removing, substituting or otherwise disfiguring any label, price tag or marking; or

4. Transferring the goods from one container to another; or
5. Concealment.

B. A person is presumed to have the necessary culpable mental state pursuant to subsection A of this section if the person does either of the following:

2. Uses an artifice, instrument, container, device or other article to facilitate the shoplifting.

C. A merchant, or a merchant’s agent or employee, with reasonable cause, may detain on the premises in a reasonable manner and for a reasonable time any person who is suspected of shoplifting as prescribed in subsection A of this section for questioning or summoning a law enforcement officer.

D. Reasonable cause is a defense to a civil or criminal action against a peace officer, a merchant or an agent or employee of the merchant for false arrest, false or unlawful imprisonment or wrongful detention.

E. If a minor engages in conduct that violates subsection A of this section, notwithstanding the fact that the minor may not be held responsible because of the person’s minority, any merchant who is injured by the shoplifting of the minor may bring a civil action against the parent or legal guardian of the minor under either section 12-661 or 12-692.

G. In imposing sentence on a person who is convicted of violating this section, the court may require any person to perform public services designated by the court in addition to or in lieu of any fine that the court might impose.

I. A person who in the course of shoplifting uses an artifice, instrument, container, device or other article with the intent to facilitate shoplifting or who commits shoplifting and who has previously committed or been convicted within the past five years of two or more offenses involving burglary, shoplifting, robbery, organized retail theft or theft is guilty of a class 4 felony.

WHAT THE STATE MUST PROVE:

In order for the State to be successful in their prosecution, they must prove five elements for most shoplifting cases:

1) That the person accused of shoplifting; 2) while in a retail store; 3) knowingly obtained goods; 4) with the intent to deprive the owner or proprietor of such goods; 5) concealed or removed goods from the retail store.

WHAT DOES THIS MEAN?

In other words, this means that if an individual goes into a store, and while they are in the store they take something without the intention of paying for it, they have committed shoplifting. An individual could also commit shoplifting by tricking a cashier into letting them pay less than the listed price for an item, or by switching the contents of a container.

Shoplifting is a crime that can also be charged as a felony if a person has been convicted of two or more crimes involving burglary, shoplifting, robbery, or organized retail theft. The third in time rule in this statute can turn what would otherwise be minor shoplifting offense into a more serious felony requiring prison time.

Shoplifting could turn into a very serious charge. If you or a loved one have been accused of shoplifting you should contact an attorney immediately.

While a lengthy prison term for shoplifting is unlikely, the State may require some prison time for felony shoplifting, especially if the offense is the third in time.