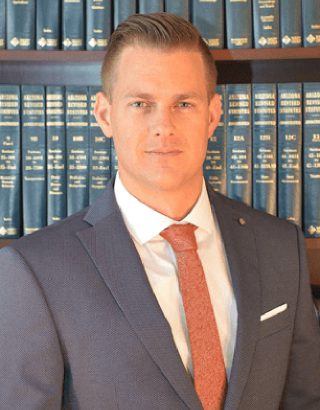 Cody Fullmer’s practice focuses on immigration law, with an emphasis on litigating deportation defense cases. Cody Fullmer received his law degree from Arizona State University and is admitted to practice before the State Bar of Arizona. While in law school, he received the CALI Award (highest scoring student in each law school class) in his legal writing class and was actively involved in the Arizona State University Immigration Law Clinic.

Prior to attending law school, Mr. Fullmer received his B.S. in Animal Science from the University of Arizona, where he was named to the Dean’s List throughout his undergraduate studies.

Mr. Fullmer is fluent in Spanish.  He was raised in Chino, California, on a calf ranch but married an Arizona girl and has lived in Arizona for the past several years. He and his wife have three children together and enjoy swimming all summer. In his spare time he enjoys the outdoors and college sports.